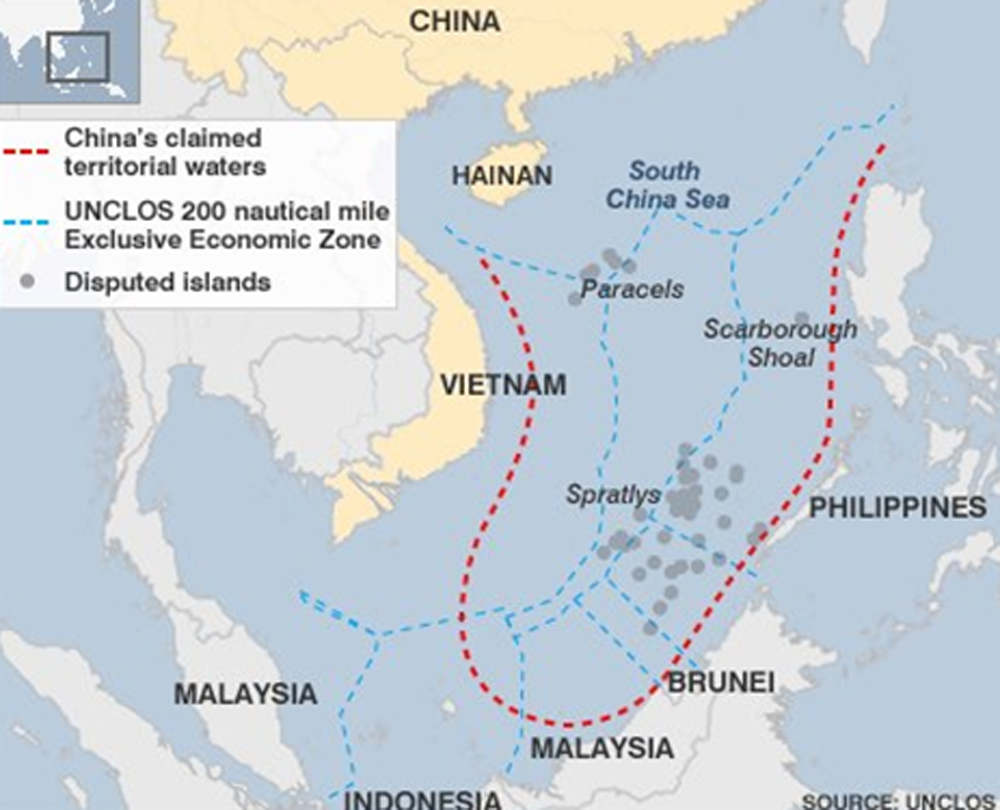 Much of my earlier remarks rely upon the concept of an “exclusive economic zone” (EEZ) which is established by the Convention on the Law of the Sea Treaty (UNCLOS) signed by both the Republic of the Philippines and the People’s Republic of China (although not ratified by the United States).  The purpose of this EEZ is to reach agreement between countries to define the economic activity within archipelagic and territorial jurisdiction.

Map includes Panatag (Scarborough) Shoal (125 miles from Philippines), the Paracels, Spratley Islands (even closer).  While Vietnam, Philippines and China can each show a basis for their claim to a portiont of the Paracels, clearly the only claim that China can make to the Scarborough Shoal and Spratleys is based upon military force.

This map clearly shows how China is over-reaching in its aggressive moves to control the vital seaway between Vietnam and China to the West, and the Philippines, Brunei and Malaysia to the east. Even if the 200 mile “Exclusive Economic Zone” of the Republic of the Philippines were ignored, and the 200 mile zone of China were used alone, the claim that all of the Paracels, Scarborough Shoal and Spratley Islands belongs to China is not supported, as clearly seen on this map.

China’s aggression is based on a pure power play – backed by warships deployed to the disputed areas – to seize control of a waterway which is both mineral rich and also a vital strategic waterway for both trade and for potential military purposes as well.  The aggression by China – supported by their stronger navy – is not only against the interests of the Philippines but also of Malaysia, Brunei, Vietnam and the United States.  If they are successful in this land grab of these strategic islands and shoals then China will have the ability to block shipping that is vital to world trade, and to militarily dominate the entire southeast Asia region and the western Pacific rim border of the United States as Japan did during World War II.