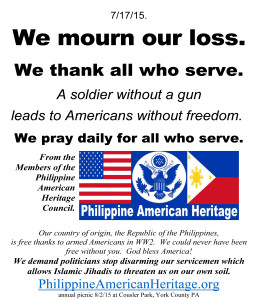 The message from the Americans of Philippine ancestry and their native born American members on a tripod placed in front of the Marine and Army recruiting office with the flowers and the large American flag was headlined “We mourn our Loss.  We thank all who serve.”

The message was aimed at recruiters at the U.S. Marine Corps, U.S. Navy and U.S. Army “Recruiting Center” (there is no U.S. Air Force presence at this Recruiting Center) in West Manchester, York PA – all of whom were visited and thanked, after the killing of four American Marines and wounding of three others yesterday in an attack on the Marine recruiting center in Chattanooga, Tennessee.

A case of energy drinks on ice was also delivered “to keep our servicemen fired up to continue defending our freedom” said a representative of the council.

The message on the poster placed in front of the Marine Corps and Army Center said, “A soldier without a gun leads to Americans without freedom.”  The poster also says “Our country of origin, the Republic of the Philippines, is free thanks to armed Americans in WW2.  We could never have been free without you.  God bless America.”

The poster message aimed at the military also has a message for elected officials in Washington DC: “We demand politicians stop disarming our servicemen which allows Islamic Jihadis to threaten us on our own soil.”

The Philippine American Heritage Council’s 4th annual “Heritage Picnic” welcomes all Americans on 8/2/15 at Cousler Park, York County PA with the request to bring the heritage dish of your choice – but good old American burgers and hot dogs are also welcome.  Visit the website for more information, PhilippineAmericanHeritage.org.