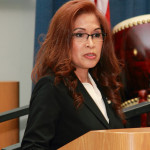 The keynote speaker at an assembly of civilian workers, officers and enlisted personnel at the Mechanicsburg, Pennsylvania international headquarters of the U.S. Navy Supply Corps (NAVSUP) helped focus attention on this year’s theme of the annual Asian American and Pacific Islander Month called by proclamation by joint resolution of Congress and by Presidents from Jimmy Carter, Ronald Reagan, George H.W. Bush, Bill Clinton, George W. Bush through Barack Obama.

Emy Delgaudio, Chairman of the Philippine American Heritage Council (PAHC) and also a member of LuzViMinda Association of Central PA and the Philippine American Association of Central PA (PAACP), Kapitbayan Filipino American Association, Inc. (KFAAI),  spoke to this year’s theme of “Many Cultures, One Voice, Promote Equality and Inclusion” and headlined her remarks “E Pluribus Unum – Out of the many, One.” 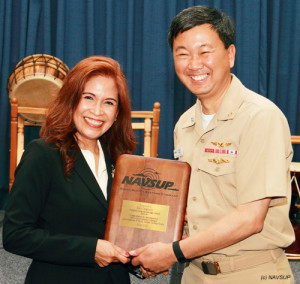 The NAVSUP hosted event included a performance by the Korean Arts Academy of America, remarks by the NAVSUP Commanding Officer and Chief of Supply Corps, Rear Admiral Jonathan A. Yuen and Lisa Howell, program Analyst, Enterprise Supply Chains Division at NAVSUP H.Q, with the keynote remarks of Ms. Delgaudio concluding the event.  Ten guests of the Filipino-American community joined 200 civilian and navy personnel for the one hour program.

Ms. Delgaudio explained how her Uncle had been captured by invading Japanese forces after the fall of Corregidor and how he and other captured Filipinos and American soldiers (all serving under the American flag) were marched at bayonette point on the infamous Bataan Death March.  While her uncle did not receive the needed supplies and reinforcements from America in time, her father, who fought on in the Japanese occupied country and also serving in America’s armed forces, did.  A letter from Congressman Scott Perry to Ms. Delgaudio labeled him a “warrior” when he passed away in 2013.

Explaining how she understood the important work of those who through their work with NAVSUP support U.S. military forces throughout the world, the most emotional part of her remarks came when she said of that dark period, “With my uncle captured, other Filipinos, inspired by America’s promise to return, took to the jungles to fight on.  I thank you and I salute you, on behalf of my father, my uncle and all Filipinos whose freedom and independence you helped secure.”

“American is the light of the world,” she added. “You, who support its military, keep that torch burning.”

Ms. Delgaudio explained how the Philippine American Heritage Council balances freedom and diversity in its mission, helping remind Americans and educate new immigrants from the Philippines about America’s freedom, and on the other hand “we also want to share with others what we love about our country of origin.”

Delgaudio reported some challenges still faced by Asian Americans and Pacific Islanders in the United States.

She strongly endorsed the complaint filed in May by a coalition of 65 Asian organizations against Harvard University for its discrimination against Asian students seeking admission.  She said “This strikes at our hearts because it hurts our children.”

She strongly endorsed the approach to assimilation detailed in the bestselling book by John T. Malloy, Dress for Success, pointing out that this has been the secret to success for so many Asian Americans who have learned and practiced American values such as hard work, respect for authority, proper dress and learning to speak the language of their adopted country.”

The key for Asian Americans and Pacific Islanders and those who wish to include them in the American dream is to remember, “Respect cuts both ways.  I ask others to respect my differences from them, even as I try to be respectful to them.”

Delgaudio complained about the use of the word “diversity” as a “politically correct weapon to silence, suppress or keep people down in order to help a favored group,” calling attention to the recent attempt to cancel the commencement remarks of Gov. Greg Abbott at the University of North Texas, and books about this topic by two liberal Fox TV commentators she admires, Juan Williams and Kristin Powers.

Delgaudio’s conclusion to the audience was to emphasize that to her, this year’s theme “Many Cultures, One Voice, Promote Equality and Inclusion” could best be summarized in the former national motto of the United States, E Pluribus Unum, Out of the Many, One.”  These words have appeared on coins and the national seal of the United States since before 1800.

“In the modern context, it means that out of many different beliefs, cultures and backgrounds, we are still proud to be one united States, of America” she said.

The full text of her remarks can be found HERE. 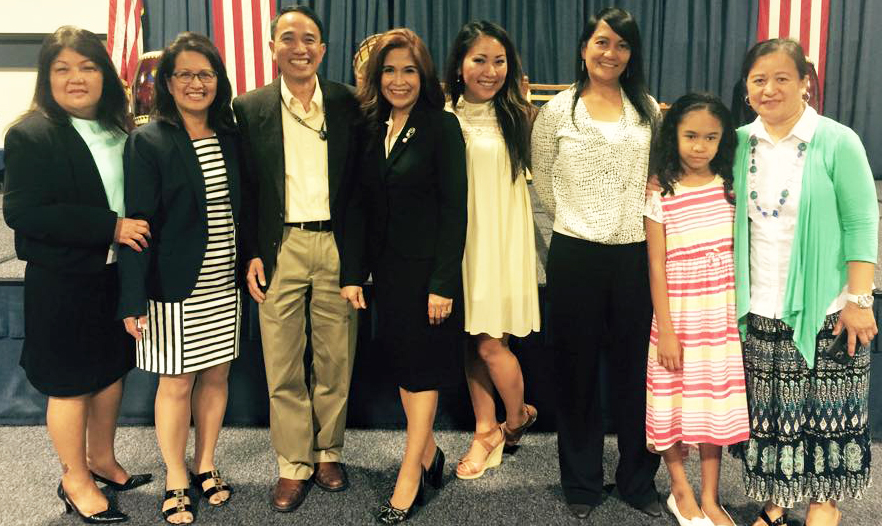 Members of the Filipino-American community who were guests of Emy Delgaudio (center) pose with Lila Howell, Master of Ceremonies (2nd from your left) after the NAVSUP Assembly in Mechanicsburg, PA on May 24 (left to right) Emma Miller, Maxwell Oligane, Valerie Shutt, Irene Whittenberger, Susan Ortiz and her daughter Hannah.

Guests of Ms. Delgaudio at the assembly included Emma Miller, President of LuzViMinda Association of PA, member of the Board of the Philippine American Association of Central PA (PAACP) and a member of the Philippine American Heritage Council (PAHC); Valerie Shutt, an officer of PAACP and member of LuzViMinda and PAHC; Irine Whittenberger, an officer for LuzViMinda and member of PAACP and PAHC and Susan Ortiz, PAHC member.  Kevin Peterson and Ronald Wilcox, director and officer, respectively, of PAHC’s 501/c/4 parent non-profit from Virginia, also attended.

Ms. Delgaudio also thanked the organizers of the assembly, hosted by the Cultural Awareness and Diversity Committee including Zachary Currier and Walter Brown, its lead organizers and Lila Howell, who also served as the assembly’s MC.

The Philippine American Heritage Council will have its fourth annual picnic at Cousler Park, Pavilion B, Manchester, PA on Saturday, Aug. 2 from 12 to 5 PM with candidates for York County office invited to speak and a cultural dance troupe comprised of its members scheduled to perform for a second time.  The formal program begins at 2 PM.  Past speakers have included U.S. Rep. Scott Perry, State Representatives Seth Grove, Kristin Phillips-Hill and Kate Klunk, Springettsbury Township Supervisor Mark Swomley, York County Coroner Pam Gay and Democratic State Senate candidate Linda Small.  The event has literally doubled attendance each year from 25 to 50 to last year’s 100 with more expected this year.

The public is invited to the free event with a suggested donation to defray expenses of $2 per person, $4 maximum per family and everyone asked to bring a dish to honor whatever heritage they wish.  Plenty of American picnic food will be available together with Filipino favorites such as adobo and the ever popular Filipino spring roll called “lumpia” (which is always the first thing to vanish so don’t be too late).  Picnic Sponsors and Benefactors will be listed in the Souvenir Program.  Details will be posted at PhilippineAmericanHeritage.org.  To be added to the free e-newsletter list write Chairman@PhilippineAmericanHeritage.org.