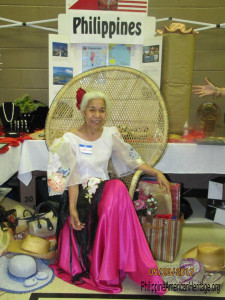 (KalayaanNews Dispatch) Evelyn Miller, the 70 year old pedestrian struck and killed by a bus in York, PA, on Wednesday, February 17, was a founding member of the Philippine American Heritage Council which now has members across the United States and in the Philippines.  With other members of the new Council, Evelyn wore an original Filipino costume and served authentic Filipino food to the nearly 400 people who attended the new group’s first event at the annual Heritage Festival of St. Patrick Catholic Church in 2012 where she was an active parishioner who attended daily mass and volunteered for church charitable projects regularly.

Evelyn Miller is survived by her sons Walter V. and Roderick M. Miller.  Her surviving siblings are Rod McLeod and Bonnie Smith.  Her surviving grandchildren are Anthony, Bianca, Lucas, Xavier and Thaddeus Miller.

The Philippine American Heritage Council released a statement by its Chairman and co-founder, Emy Delgaudio:

“Evelyn Miller was a good and decent fellow Catholic and member of our Philippine American Heritage Council who generously and reliably gave of her time and effort to help her church and our organization which she was a leading member of and co-founder of four years ago.”

“Evelyn has been a good friend and companion to my husband and I.  She will be sorely missed.  We pray for her family and for the repose of her soul.  We will never forget her generous and giving spirit, which we and all members of our Council hope to emulate in her memory.”

“We are grateful to St. Patrick Catholic Church for giving her a home base for her generous volunteer activities to help the less fortunate, feeding the hungry, supporting mothers at the local pregnancy crisis center and other charities.”

Emy Delgaudio also reminisced how it was Evelyn Miller who suggested that she should be the chairman of the new group in 2012 as together the two ladies worked on the first function that brought together 20 Filipinos to joyfully celebrate and share their culture, faith, history – of the Philippines with their fellow Americans, and of America with their fellow Filipinos, at the St. Patrick Church annual heritage festival.  Their efforts and distribution of their own flyer to help promote the annual festival boosted attendance from the preceding year’s 200 parishioners and friends to 400 attendees in 2012.  They were rewarded for their efforts with a double-sized booth for the oversized group of volunteers and authentic Filipino foods they served and their cultural display.

The Philippine American Heritage Council welcomes new members who share their goals, whether they are Americans interested in the Philippines or Americans of Filipino ancestry.  One such American is Robert Cosgrove, Knights of Columbus Grand Knight at St. Patrick Catholic Church, who is the Council’s York County working group chairman.

The Council Evelyn helped form, also sponsors the KalayaanUSA Cultural Ensemble, which has performed dance and music routines throughout central Pennsylvania and as far away as Philadelphia, Maryland and New Jersey.  New (and free) classes are now forming in York for those interested in learning one or more cultural dances.  The performance schedule is being created this month and requests for them to perform during the April-September period will be considered.

Rev. Keith M. Carroll, Evelyn’s Pastor at St. Patrick Catholic Church, released a statement saying “she was a kind and generous individual.”  He asked for prayers for Evelyn and her family and for those at the scene of the accident.

Condolence messages emailed to EvelynRIP@PhilippineAmericanHeritage.org will be forwarded to her family.