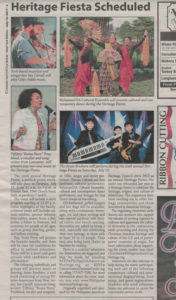 The Philippine American Heritage Council is in the news again with this page 3 Community Courier article (click on image to read it).

Last call for you to bring a dish and join us tomorrow at what promises to be the biggest and the best “Heritage Fiesta” annual picnic, organized for the sixth year by the Philippine American Heritage Council and New Americans by Choice, co-sponsored for the second year by York County Action, for the first year by the Conservative Christian Center.

Please note the “second front page” article (as page 3 is commonly called in the newspaper business) about the Heritage Fiesta in the Community Courier this week (click on the image to read the entire article if you missed it).

And, we are making progress with the Democrats, who we have been asking to attend and speak for all six  years but only once had one of their candidates stop by and speak and mingle (Linda Small, who lost her race for State Senate but made friends with many at our picnic).

This year we have Sandra Thompson and Clyde Vedder, both winners of the Democratic Party primary in May for Court of Common Pleas.  Clyde is also the nominee of the Republican Party.  So that’s two Democrats this year.

And, we have even heard from the Democratic Party Chairman for the first time in six years.  But it is sad news.  He tells us that he could not attend and speak because Congressman Perry will be there, who he feels doesn’t represent the interests of voters and immigrants.

We wish that instead of trashing the other party, those who want to win elections should step forward and tell voters what they stand for, and let the voters choose.  Congressman Scott Perry did that in 2013 when he was our keynote speaker and he is doing it again tomorrow.  And, he has also spoken at a “meet and greet” that members of the Philippine American Heritage Council hosted for him at a private residence.

We think it is a sign of disrespect for the voters in general, and for the immigrant community especially, when our major event earns a yawn and being ignored at worst, or at best, a polite no thank you, from the Democratic Party.

And we hasten to add, it isn’t just the voter and the immigrant community that is being disrespected and hurt by those Democrats who continue to avoid our annual picnic.  They hurt themselves far more, by not participating.

Perhaps we are naive about this, but the way to success in American politics – speaking as the newcomers we might add – is to do what Congressman Scott Perry seems to do consistently – make yourself available to the voters, speak to them, listen.

Whatever your politics and your philosophy, we’re all going to have a great time at our biggest and best annual picnic, and we feel sorry for those who are missing out on the fun and the chance to make their case to voter and to the immigrant and heritage community.